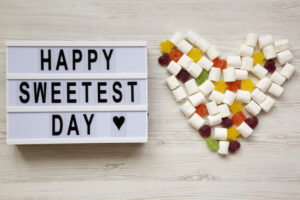 To some people, Sweetest Day is nothing more than a “Hallmark holiday.” To others, it is a special tradition shared with loved ones. Depending on where you live, you may have not even heard of the concept at all. Wherever you stand with the holiday, we bet your knowledge of its history and meaning only scratches the surface.

Check out some of these interesting facts about Sweetest Day just in time to celebrate the occasion with the people you care about this year!

1) There is some debate about the origins of Sweetest Day.

The “Hallmark” version of the start of Sweetest Day is that in 1922 an Ohio candy company employee, Herbert Birch Kingston, wanted to spread joy to the less fortunate. He decided to hand out candy to the underprivileged, orphans, and homeless, and a few celebrities followed suit and popularized the idea.

Other origin stories claim that the National Confectioners Association invented Sweetest Day in 1916 to boost autumn candy sales (before trick-or-treating became a tradition). According to this version of history, Kingston and the celebrities who participated were just a marketing ploy.

Sweetest Day is not widely celebrated or even known of in some states. It is most popular in Ohio, where it began, and in the surrounding Great Lakes region. Illinois, Indiana, Michigan, Wisconsin, and parts of New York and Pennsylvania are a few of the nearby states that have taken on the tradition. The holiday has also slowly begun to spread further throughout the country, including to Florida and Texas.

3) Sweetest Day is not just for couples.

Many people just think of Sweetest Day as a second Valentine’s Day, but the meaning behind the two holidays differs. Thanks to its regional origins and celebrations, Sweetest Day has become associated with Midwestern values like honesty, care for neighbors, and friendliness. Unlike Valentine’s Day, the idea is to celebrate and show appreciation for everyone in your life, not just a romantic partner.

4) Gifts have evolved beyond candy.

Initially, Sweetest Day was mainly about gifting candy, hence the name. Now, however, the holiday is celebrated by giving many different types of gifts. These days, it is common to honor Sweetest Day by giving the people you care about not only candy, but also cards, flowers, baked goods, personal gifts, and even good deeds.

Make this year’s celebrations on the third Saturday of October special for your loved ones with a designer Sweetest Day flower arrangement from Cole’s Flowers! Shower the most important people in your life with beautiful flowers artfully crafted into the perfect centerpiece. With a variety of arrangements to choose from, you’ll find something sweet for everyone you care about.